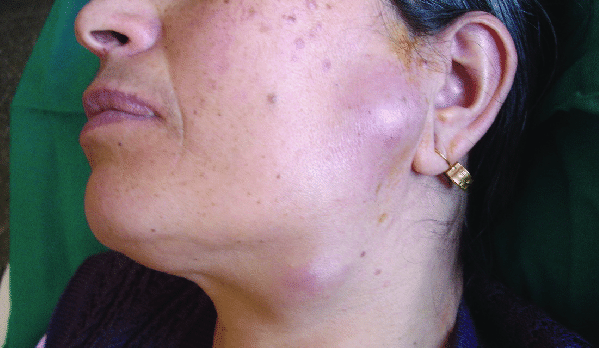 Although this infectious disease is commonly referred to as rabbit fever, it is carried by some 100 other species of wild animals as well as sheep, cattle, cats, and at least six other species of domestic animals. Tularemia is spread to humans by handling infected animals, eating their meat, drinking contaminated water, inhaling contaminated particles, or being bitten by ticks, deer flies, or other insects carrying the causative Francisella tularensis bacterium. Until recently, tularemia was considered a rare disease, confined mostly to hunters, trappers, and fur handlers. Doctors now think that some mild cases of illness attributed to flu are actually tularemia. Those at risk of contracting the disease include butchers, farmers, and campers and others who frequent tick infested areas. In the United States, cases of tularemia are also reported among laboratory workers who have come in contact with the tularensis organism. Symptoms appear suddenly a few days after exposure. Typically, a painful, ulcerative sore develops at the spot where the organism has entered the body often the hands, mouth, or eyes, or the site of an insect bite and lymph nodes become inflamed, swollen, and tender. A measles like rash may appear. About 8 percent of cases are classified as typhoidal, in which the organism travels throughout the body, causing fever, abdominal pain, liver and spleen enlargement, and additional symptoms. Other common forms of the disease include oculoglandular, characterized by severe conjunctivitis and swollen lymph nodes; oropharyngeal, marked by a severe sore throat and swollen nodes; and glandular, in which the lymph nodes become swollen without the usual skin ulceration. Some patients develop pneumonia, either as the primary manifestation of the disease or in association with other symptoms. Most people recover completely, but about 6 percent of those who do not receive treatment for the disease die. After one attack, the person develops immunity against future tularemia infections.

A doctor will suspect tularemia if a skin ulcer and swollen lymph nodes develop within a few days of contact with a rabbit or other rodent or after a tick bite. But diagnosis may be missed or delayed, especially if the disease was contracted from other animals or follows a different course. In these cases, a laboratory culture can establish the diagnosis. Blood tests can also detect tularemia antibodies, but not until about 10 days after infection.

Antibiotics can cure almost all cases of tularemia. One regimen calls for giving streptomycin by injection twice a day until the fever disappears, and then once a day for five days. Gentamicin is also effective against tularemia. In other cases, chloramphenicol or tetracycline are given, but a relapse may occur when using these treatment methods. Severe cases require hospitalization. Although normally the disease is not passed from one human to another, an isolation unit may be advisable for patients with tularemic pneumonia. Large abscesses in infected lymph nodes may require surgical drainage. Patients with tularemia of the eyes may benefit from atropine eye drops. Codeine is prescribed to alleviate a severe headache, which may accompany ocular tularemia.

Warm water soaks and compresses dipped in salt water can speed healing of skin ulcers and ease the pain of swollen lymph nodes.

Prevention is the best approach. You should always exercise special caution when handling wild animals and warn children about approaching them, especially if they appear sick. Hunters should wear rubber gloves and a protective face mask when butchering and skinning their kill. All wild game meat, especially rabbit, should be cooked until it is well done. The tularemia organism is extremely hardy; studies show that it can survive for three years in frozen rabbit meat. When venturing into areas with ticks or deer flies, wear protective clothing. An insect repellent containing DEET offers some protection against ticks. Inspect your body carefully for ticks and remove any carefully Use tweezers to ensure that the entire insect is removed . If you live in an area where there are ticks, try to keep pets indoors; those that go outdoors should wear tick collars. Even so, comb them daily to remove any ticks. For people who have tularemia and experience fever, bed rest may be advisable until the fever subsides.

Other Causes of Tularemia Symptoms

Flu and other viral illnesses can cause fever, swollen lymph nodes, and other symptoms of mild tularemia. A strep throat resembles oropharyngeal tularemia; mononucleosis and numerous other infections can cause swollen and tender lymph nodes.